“No Charge … the Guy in that Car Treated You” 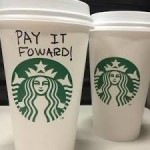 What? Really? I heard about people in the Starbucks drive-thru paying for the car behind them, but it never actually happened to me. This was so cool! I asked the guy in the window if this occurs a lot and he replied, “All of the time! The last 6 cars bought coffee for the people behind them.” No way!

I told him to count me in since I didn’t want to break the trend. So I bought coffee for the next car and hoped the momentum would continue. Grinning ear to ear, I floored it out of Starbucks to catch up with the nice guy in the blue truck to tell him he made my day, but I got stopped by the red light. It didn’t matter – I was on top of the world!

I texted my sister and then called my husband to share what happened. I was just so excited by this small act of kindness. They both laughed and my husband told me he buys burritos all of the time for people behind him in line at Chipotle. (He works for Chipotle, so we get $100 on a Chipotle gift card every month which is a ton of burritos for just two people.)

Still excited, I carry my coffee with two hands into Whole Foods like it was worth $1 million dollars. I rarely shop at Whole Foods, so I didn’t realize they keep the carts outdoors. I see some mini, kid-sized shopping carts when I enter the store. I’m so tempted to drive one of them around the store in my happiness, but instead ask the cashier if there are any bigger carts. With a playful smile, he says, ‘No, only those small ones’. They he laughs and sends me back outside.

The effect of that coffee treat was so contagious! Not only did it put me in a generous and playful mode, every person I encountered picked up the vibe. It was nuts. I heard of pay if forward, but not like this.

Recently, I had the opportunity to hear an inspirational presentation by Franziska Isell. It was called “Acts of Impacteurness”. Her mission was so enrolling that I have highlighted some of her ideas in an upcoming podcast. It’s just like the guy in front of me at Starbucks who paid it forward. Be sure to subscribe to my podcasts for the full episode, but here’s a sneak peak of some of her ideas:

My goal is to do more Impact actions with my own clients since it’s like a domino effect. It’s a great way to strengthen connections.  I’d love to hear how acts of Impacteurness is working for you. Please drop me an email at Nancy@NancyGaines.com

Is your business thriving?  If not, let’s talk! Enroll in a full Speed Consulting session today or test it out with a complimentary 15 minute call.  Just sign up at the top of this page.